An epic location project by SkaGeN

The actors Clara Van den Broek and Korneel Hamers, along with 10 extras, take the audience on a journey through an imaginary museum. There, one embarrassingly naked moment, they meet Gerard Richter, see all sides of the room at Gustave Courbet’s studio, end up in Bruegelian poses and allow themselves to be washed away by William Turner’s visual violence.


SkaGeN makes a journey across three centuries, through the different rooms of the museum, where an unprecedented selection of marine paintings is the basis of the story. A story about the sea as a lover, as a nemesis, the sea as a beacon, as a border, with its deadly siren song. Zeestuk (Seascape) is a performance with art at its basis, but it doesn’t shy away from political statement and current events. Clara van den Broek and Korneel Hamers transform from artist to refugee, to world leader, and let marine paintings speak to you. For the sea touches what is essential in us, whether your name is Angela or Fatima.


The audience listens in via the audio guide of the museum. One moment the viewer witnesses the intimate story of the painter and his model; then, later, he’s present at a critical studio interview with Angela Merkel, who by her statements might well change the course of history. The grandeur of the location - an impressive museum decor with a view of the sea - in confrontation with the reproductions of the painted forces of nature, is in contrast with the intimate nature of the audio experience, which gets directly on the skin.


Conductor and composer Bart Van Reyn composed an impressive orchestral soundtrack, based on the Stabat Mater by Vivaldi.


“A deeply grounded audio and visual piece, in which irony washes over profundity and back again, as in wind force 10” 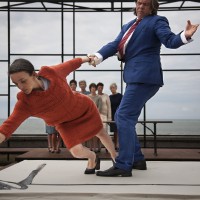 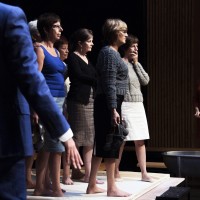 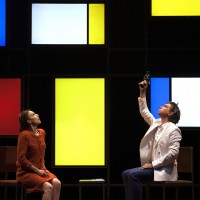 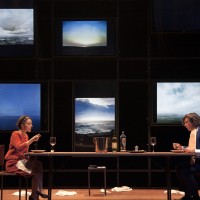 Archive items will be addes shortly